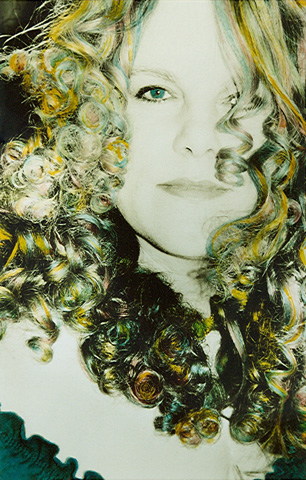 A little nuts, isn’t it?

And yes, that’s my real hair.

The year was 2002 and I was in a color photography class, and the assignment was Haptic versus Visual. Pick a subject and shoot it straight, simple, and honestly. Then take that same subject and shoot the feeling. Not the visual representation, but the “feeling!” Two prints, one Visual and one Haptic.

All I can say is that I must have been feeling really really colorful at that point.

How was it done? The hair or the image? Both? Well the hair was easy, just get it damp and put in small rollers, let dry, and Voilà! Instant curls!

Creating the image wasn’t hard either, but there were quite a few steps. It was originally shot on black and white 35mm film and printed on black and white paper. Then I took food coloring and painted liberally. The food dye shows up best in the lightest parts of an image, but I like applying it to the darker areas as well – and making rich inky shadows. Then I shot that print with a 4×5 camera, using color film. The final print was made on color paper – so it is, in the final form, a full-color chromogenic print, with the look of a hand-painted black and white print.

So where is the straight photo for comparison? The Visual representation? Isn’t this Haptic versus Visual? Where’s the Visual? Well, it still exists, but it’s boring. Really boring. And not really representational at all. And I got a B on it. I got an A on the Haptic version though, so maybe I’ll just leave this post with the one image, and skip the boring…

2 Replies to “Haptic versus Visual”