How do you move a tiny house on wheels off a remote mountain top in Northern California? It was a big job! And it required a 4×4 truck to go in reverse for a quarter mile down a steep hill, towing my nearly 7000LB house, on a very narrow and curvy dirt road, where one side was mountain, and the other side dropped maybe 100 feet down to the stream below.

And that wasn’t the end of it… from there the truck was able to go forward, but the road was extremely narrow with tree branches everywhere. Then the house went through a stream, and both the house and the 4×4 truck had to be towed out by a waiting tow truck. Next up were several miles on an old gravel logging road that is now a forest service route, and then finally out onto a twisty and narrow highway, where the cars go 55MPH, and a 10’6″ wide house took up the entire lane, with no room to spare.

I was lucky! I hired the best possible people for the job. Daniel and Sarah of Affordable Towing in Crescent City took such good care of my house. Sarah walked for over a mile, guiding him down the mountain, and moving tree branches and rocks. And Daniel took his time, and was extremely precise with every step–which meant the job went a lot faster than it might have otherwise. I don’t think anyone could have done a better job than they did!

It was an extremely stressful day. I had been dreading it for six weeks. But my house arrived safely, and I’m so grateful to be back on flat land! 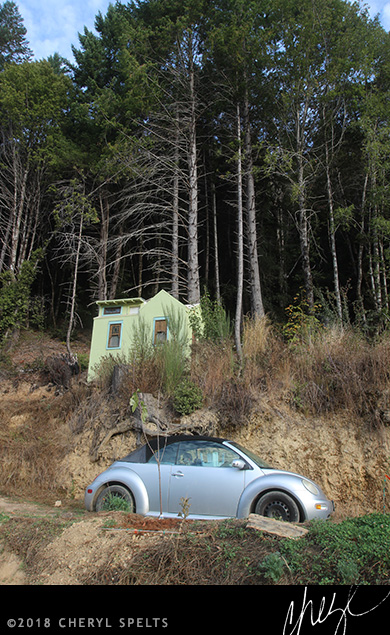 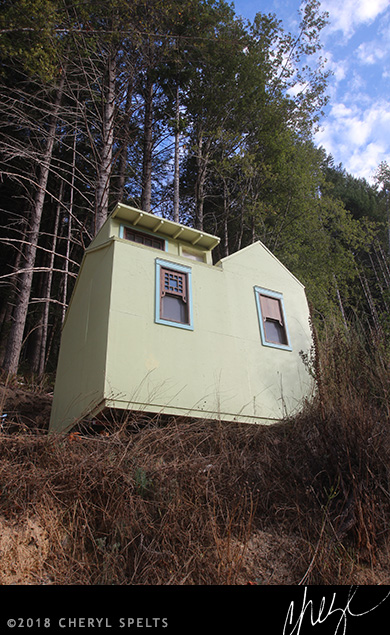 My house is on one branch of an old logging road, and my car is on the branch below,  and you can see how steep the hill is between them–and that’s how steep the entire mountain side is.

Hooking up the house. The trailer my house is built on is only two years old, but the ball hitch rusted in the last six weeks, and it was a bit tricky to get the house hooked up and ready to go. 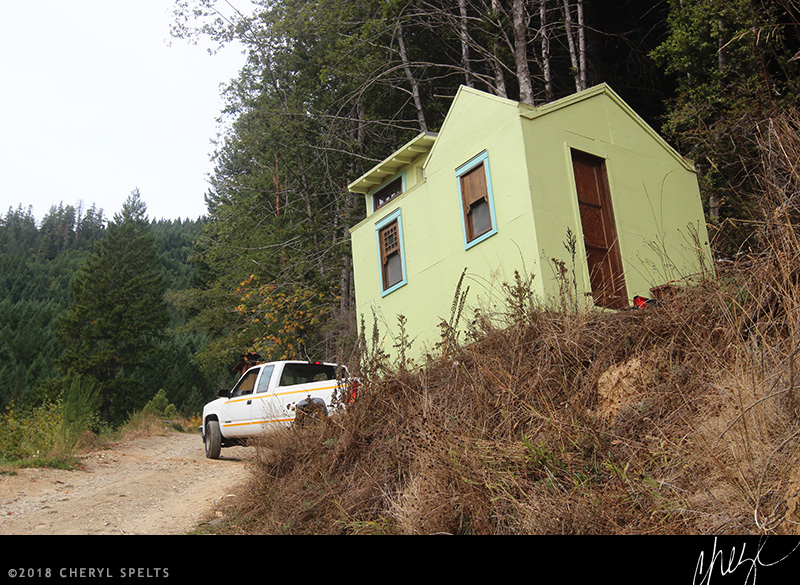 Pulling out of the side road, and onto the main driveway–the angle was so tight the only way out was to back up down the main road. 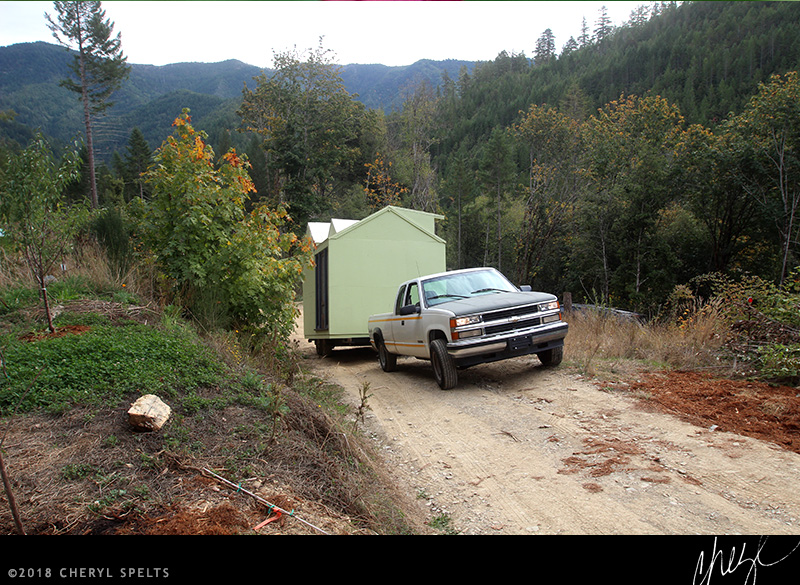 Backing up the main road… It looks fairly wide here, and that’s why I was able to get a photo of it. Whenever the road was too narrow, and the cliff was too close, I had to turn away, and not watch. I had visions of my house going off the road, and down the mountain, and taking the driver with it. It was terrifying in a way I’d never experienced before.

At the end of the quarter mile of backing up, the road got wider and there was a tiny parking lot, and the house is almost there at this point! 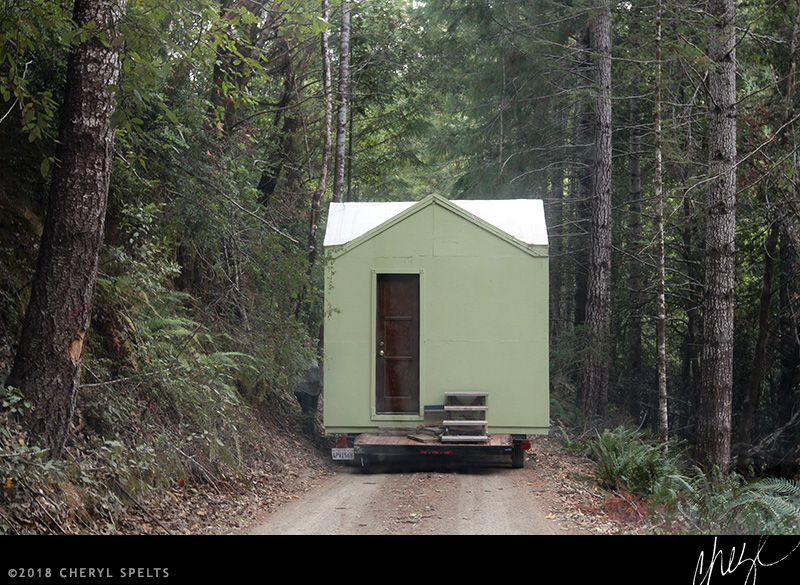 Finally, going forward! You can just make out Sarah on the left side of the house, holding branches out of the way, and guiding the truck. 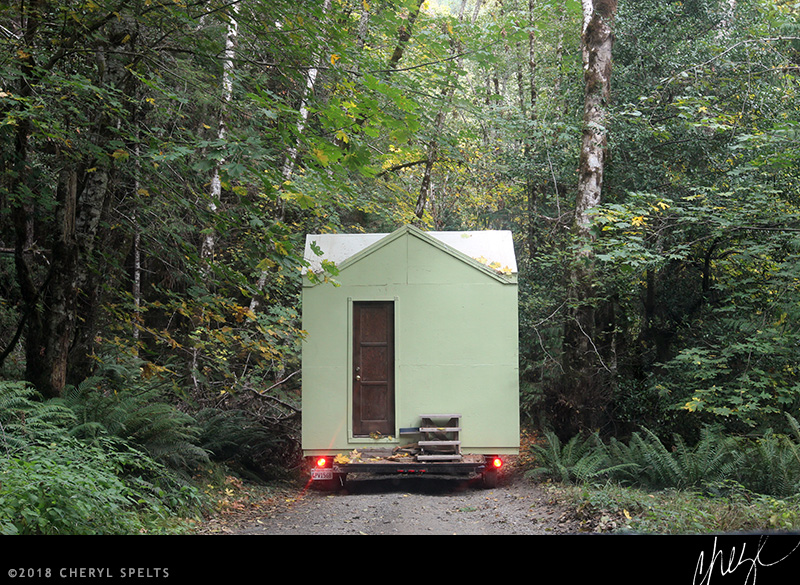 is there even a road ahead? Much of the route looked like this–so many trees and an extra-wide house taking up the entire road. 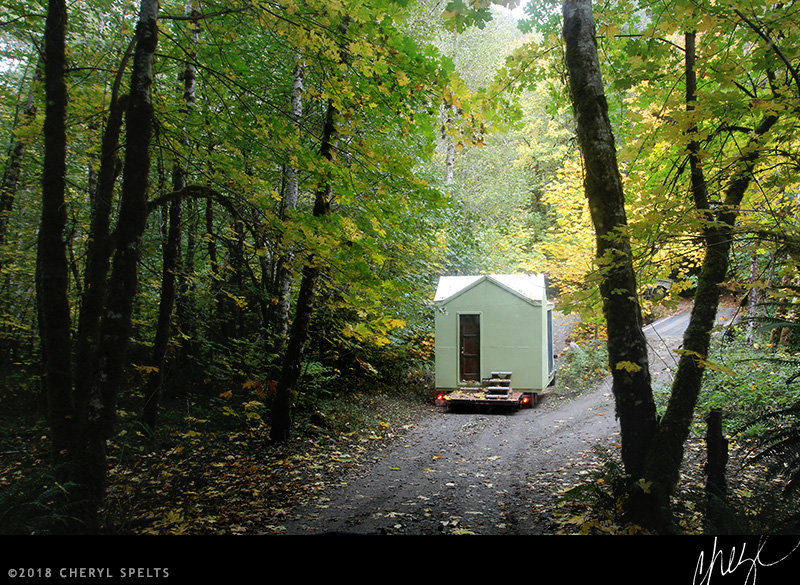 The house is just about to head through the stream. If you take the right Y up, you can go over a bridge, but the bridge only holds 7000 lbs and my house weighs nearly that much alone, then add the truck, and you’d be way over the weight limit–so through the stream was the only way out. 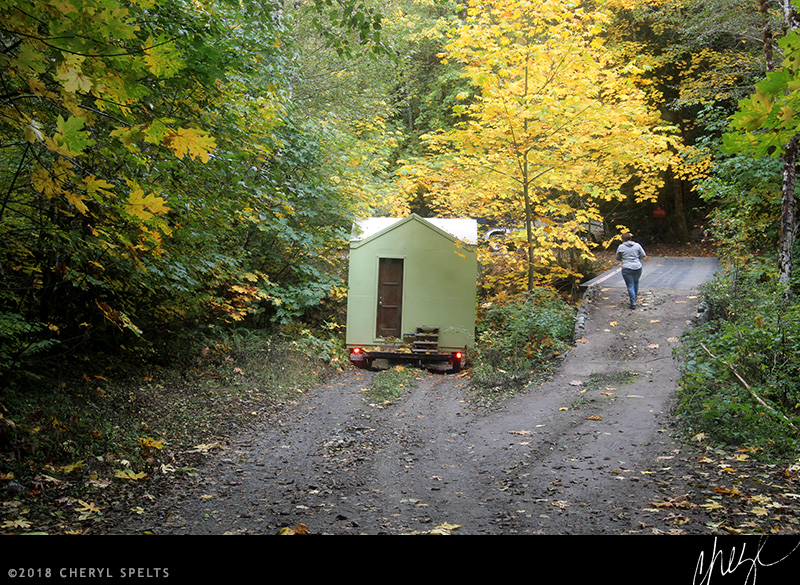 Into the stream! Sarah took the bridge over, and was able to guide things while looking down at the house. 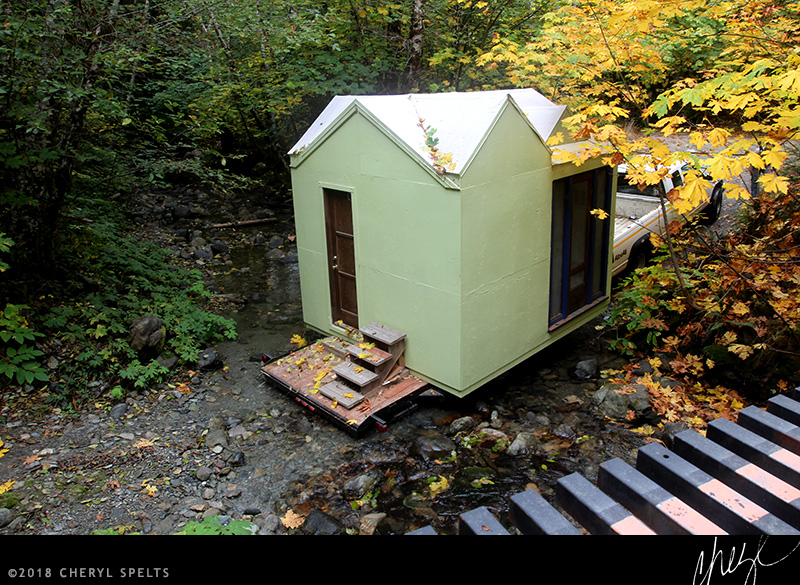 And my house in the middle of the stream. It looks fairly shallow, and it is right now, but I imagine it rushes a lot faster once the rains come, and there was rain in the forecast. So I was grateful to be getting it out before the weather got worse.

This view shows better the angle the house was at, while in the stream. 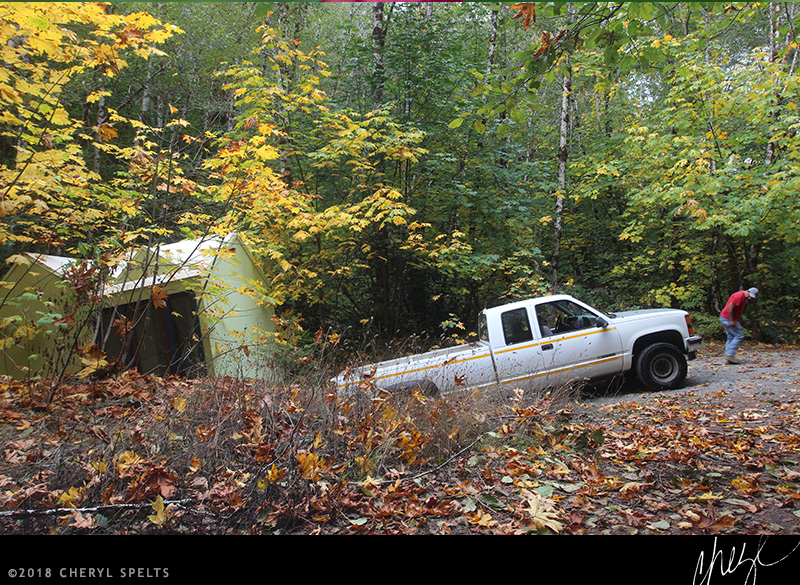 Yeah, that’s a pretty steep hill to go up, to get out of the stream.

Hooking up the tow truck, to the 4×4 to pull the house out. I was so grateful that several people warned me this might be necessary, and that the tow truck was waiting on the other side. 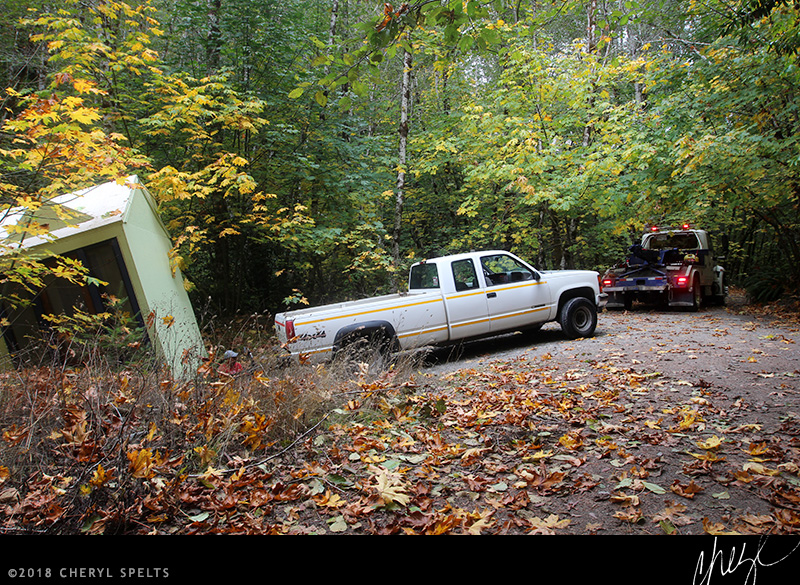 And the house starts to come out…

And we’re back on the road! By the way, when I look at this photo all I see is that my front window isn’t installed yet–the house will look much better when I can get a window in that big blank space beside the front porch. And the triangular stained glass windows in the gables… And it will look even better when I can do the brackets for my eaves, and then do a fancier roof. But for now, my house is livable, and I’m happy to have it exactly as it is!

Then several miles down a forest service route. This part of the road is gravel, and so much easier to navigate, but still not easy.

Back on a paved road, and about to pull onto the highway. The tow truck took over to towing duties at this point, and the 4×4 became a pilot car to warn other motorists what was coming. 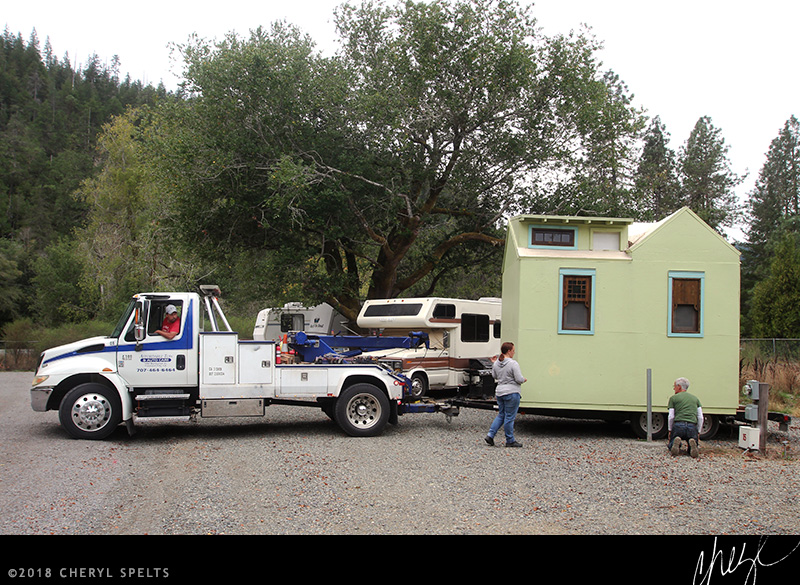 And 3.5 hours later, the house is safe and sound at it’s new parking place! If you’ve ever wondered how tall a tiny house is compared to an RV, you can see how short the RVs in the background look in comparison to my tiny house. As tiny as my house is, it looks massive next to an RV!

My Tiny House: Framing the Foundation