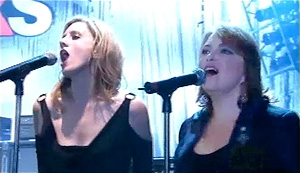 Back in July, at the INXS concert in Barrie, Ontario, Canada, there was a TV crew shooting for an upcoming TV show. Some in the audience recognized one of the featured backup singers as she came onstage, and I vaguely remember the name of the show being The List – but since I don’t live in Canada I never expected to hear anymore about it.

But thanks to the web, I got to see part of the premier episode of this new show – the episode that features an average person fulfilling a life-long dream to sing with a rock band. It’s a cute show, and I love the premise. I wish it was shown here!

And it was fun to see part of that concert again. I had front row for that show – and there were cameras everywhere and I recognized a lot of people in the crowd! Then again, I knew nearly everyone in the front two rows. We’d all gone to the concert in Ottawa the night before – it was an definitely an INXS weekend! 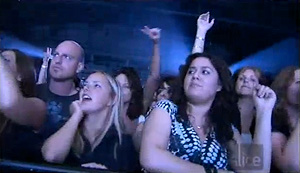 Would I like to sing with a rock band? At one point in my life it was definitely on my list – and now it’s just as definitely not. Funny how things can change. But sing with INXS? I’d do that if given the chance. They’re not your typical rock band, and it would be fun. So yeah, I’d sing with INXS, but they’re the only band I would even consider.

Watching the show made me think about other things on my own personal list. I’ve gotten to do some really fun and interesting things lately, but there are still items on my list to do yet!

The images above are screen shots from video of the show. For more on The List, see http://www.slice.ca/Shows/.