I’ve shot the Estudillo Mansion twice before – once in 2006, when a family friend took us on a private tour of the inside, and I was able to document some of the damage that still existed from the Lander’s Earthquake in 1992. And then I shot it again in 2010, after the renovation had been completed – but that time I didn’t go inside, I only shot the exterior.

So it was time to go back and shoot the inside! And of course, a little bit of the outside… The grounds are just so beautiful, and the exterior of the house is what I love most, so I couldn’t go and not shoot a little of the outside.

I’ll start with the staircase, since that’s what you see when you first walk in the front door. If you’d like to see what that staircase looked like in 2006, before the renovation, click here! It’s just as steep, and the banister is still exceptionally low – which is just as it was built back in 1885. It’s fine going up, but a little scary coming down, if you’re tall. My mother is much shorter than I am, and for someone her size, the banister height is fine! The big difference from 2006 is that the walls are now back to the original color – a muted blue-green – it’s actually darker in person that it appears to be in my images. And that the floors have been refinished, and the staircase painted.

Opening off of the staircase and entry hall are two front rooms – a men’s sitting room and the music room with a really magnificent rectangular grand piano. I didn’t shoot many of the furnishings, since I was focussing more on the house itself – but I couldn’t resist that piano – it was magnificent. And I loved the vase of peacock feathers sitting on it – that is a very Victorian touch! Especially in Southern California, where Elias J. “Lucky” Baldwin, the founder of Arcadia, imported three matched pairs of peafowl from India in 1880 – and almost all the peafowl in Southern California still today, are descended from those same three pairs. So it would not be a stretch at all, to imagine peacock feathers in the Estudillo home in the late 1880’s. 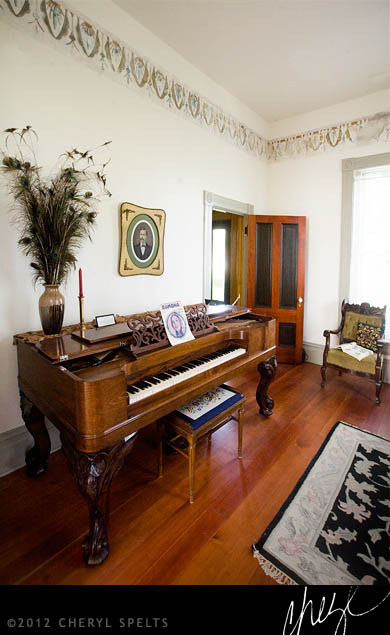 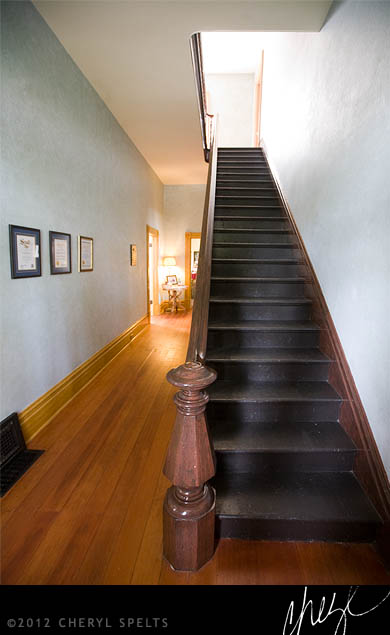 The hand-painted frescoed borders in the first floor rooms are original to the house – they are mentioned in an article that appeared in the San Jacinto Register on May 2, 1889. They are not stenciled – they are frescos – which is a process where pigment is mixed with water and painted on a thin layer of wet, fresh plaster – so the pigment is absorbed by the wet plaster. It’s an old Italian classical process. And since it is hand-painted by an artist, there is some variation, as the border continues around the room. They’re beautiful, and special, and can’t be duplicated – and the committee steering the renovation and maintenance of the house has wisely decided not to touch them or change them in any way, despite the fact that they were damaged over the years. They were evidently covered with wallpaper for many years, and so were “saved” from being painted over – but the wallpaper itself damaged the painted surface, and then the Lander’s Earthquake did more damage. I have a photo from 2006 that shows what the renovators first found, as they first uncovered the borders. 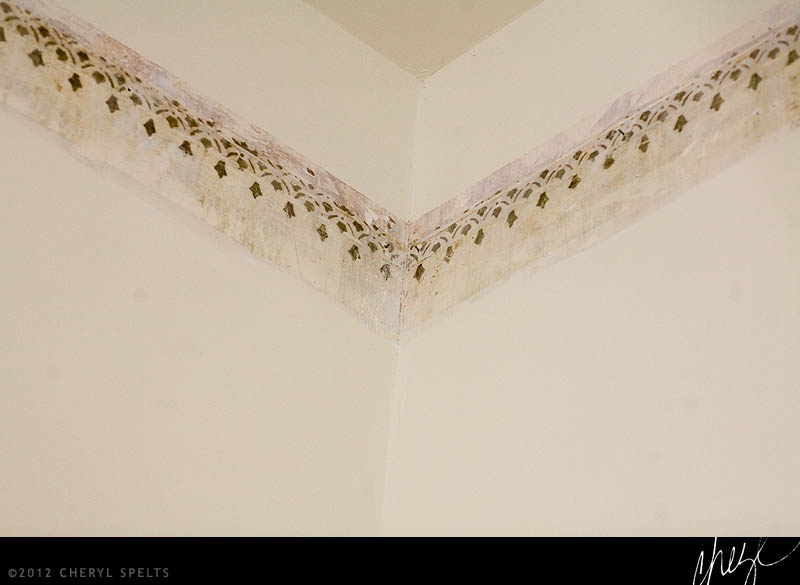 This border is in the back parlor, across from the dining room, and behind the music room. It’s a room that gets a lot of sun, with big windows, so it seems appropriate that it would have a lighter, simpler border. The fireplace is also in this room – and I have a photo of it in 2006, but I didn’t shoot it this time, because it just doesn’t feel like it’s original to the house – to me. I have no insider knowledge – but I just don’t think it fits – so if you want to see it, click on the link to the older photos! 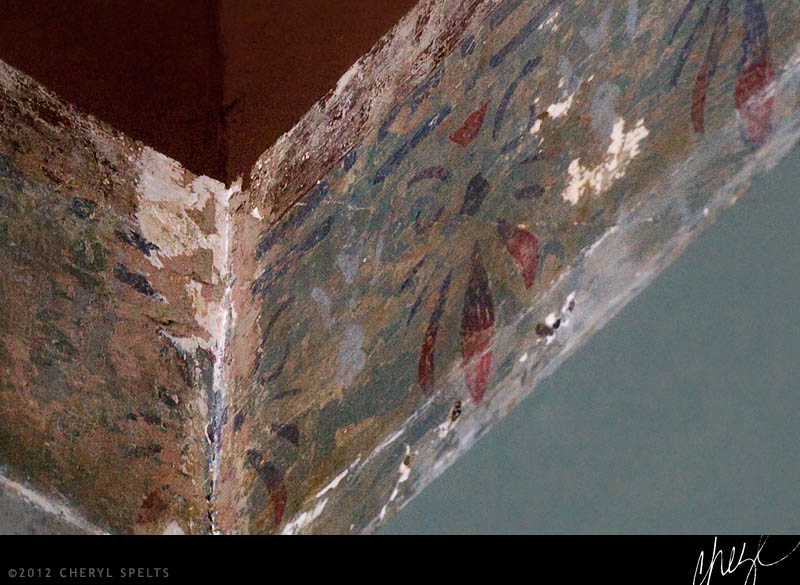 Next up is the dining room – and I love the frescoed border in this room! Throughout the house the same palette of blues and greens is used, and the dining room is the darkest room in the house – so the border is of course darker and more vibrant as well. I’ve included a close up, so that you can see just how vibrant the paint once was. It must have been beautiful when the artist first finished creating it! 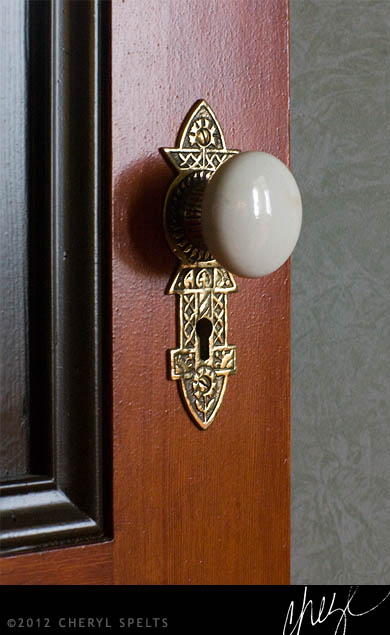 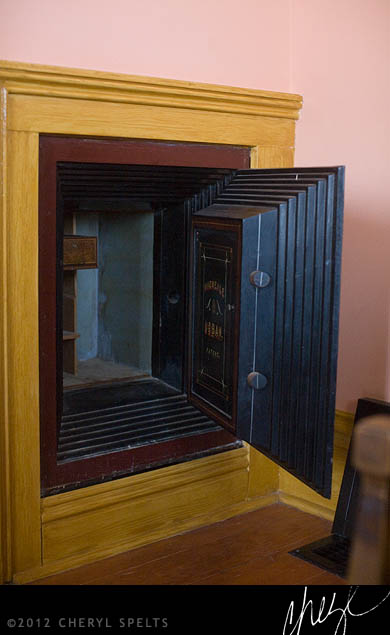 This doorknob leading to the dining room is authentic – it was either original to this house, or it came from this house’s sister mansion on Soboba Road, built in the same era, with the same floor-plan. And the little room off of the dining room, is actually the china closet – a very common feature in upper-end Victorian homes.

An finally, the last room on the bottom floor is the men’s sitting room – and it includes the original safe! Fransisco Estudillo owned the Rancho San Jacinto Viejo, which totaled over 4000 acres – so he had a lot of employees – and thus probably needed a safe for his payroll. The safe is built into an interior wall, under the staircase, and is actually rather small inside. There are some tiny wooden drawers that are barely visible in the image.

Next I headed upstairs…

Just like downstairs, there is a wide center hallway upstairs, with the staircase – and four rooms open off of that hallway. Three of the rooms are bedrooms, and they are so stuffed full of vintage furniture that I wasn’t able to get a good shot of any of them. In person, it’s really interesting to see all the antiques from many different eras – and some of the furniture is really spectacular!

The fourth room was originally the bathroom – the house had hot and cold running water when it was first built, and there are stories of a huge clawfoot tub and oversized bathroom sink – but supposedly they still used an outhouse in the backyard. I can understand locating the kitchen separate from the rest of the house – kitchens were dangerous back then, and it was a safety precaution to locate the kitchen elsewhere – plus it kept the whole house cooler in summer. But an outhouse in the backyard? I can only imagine having to head down that staircase in the middle of the night, and then across the dirt backyard to get to an outhouse? It’s probably a good bet that a couple of chamber pots were in use in those early days! 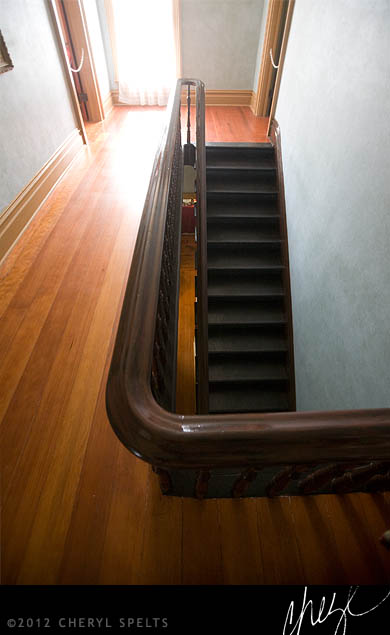 This is the view of the staircase from the second story, looking down. And an original door hinge. There is one door hinge upstairs that is a reproduction – but it’s hard to spot which one it is! The artisan who created it, did a good job of matching the vintage hinges! 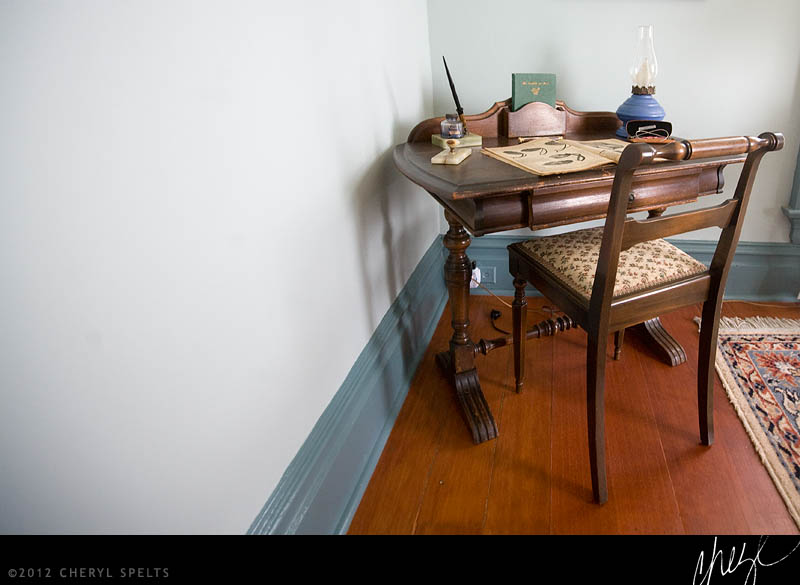 An antique desk in one of the bedrooms. 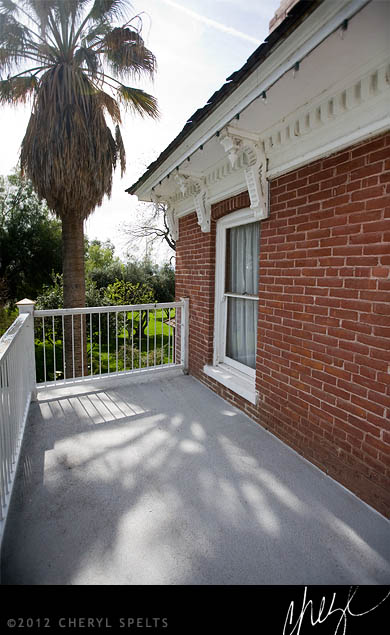 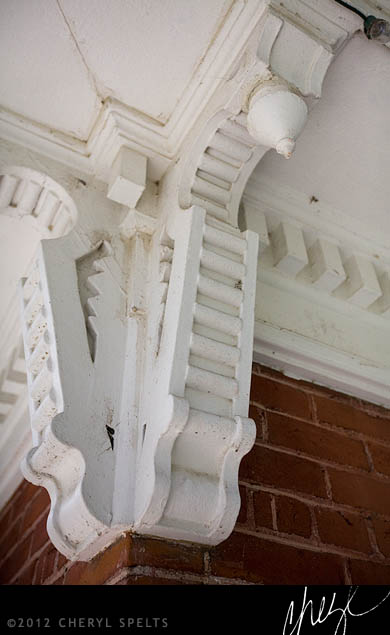 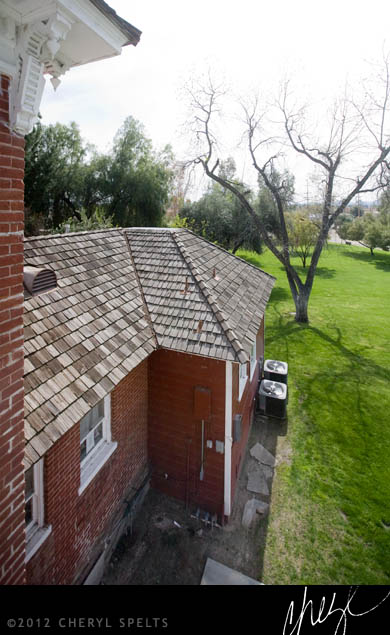 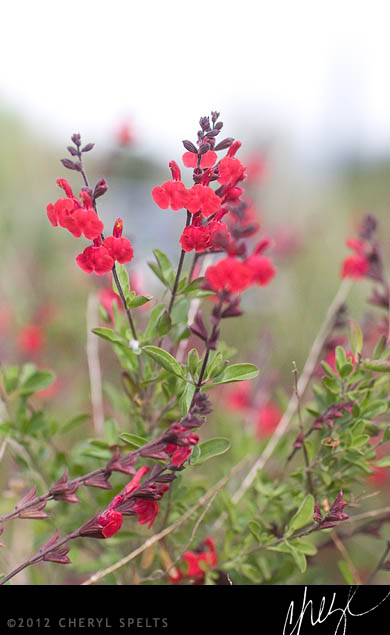 On the left is the back edge of the orginal house in the foreground, and then a brick addition – which was the first kitchen that was added to the actual house – and then beyond that is a clapboard addition that was the second kitchen added. Guess the owners that came after Estudillo wanted an indoor kitchen! 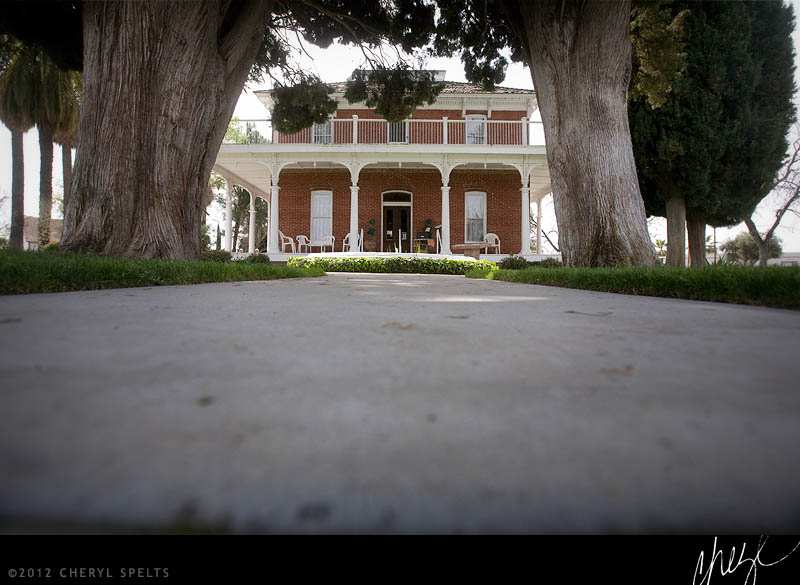 There are two doors leading outside from the second story – the main door leads off of the wide central hallway, but there is also a second door that leads directly from one of the bedrooms – and it’s on the shady side of the house, so there’s a beautiful little breeze that blows and it’s just the best place to hang out on the entire property. If I lived there, that would definitely be the bedroom I’d choose! 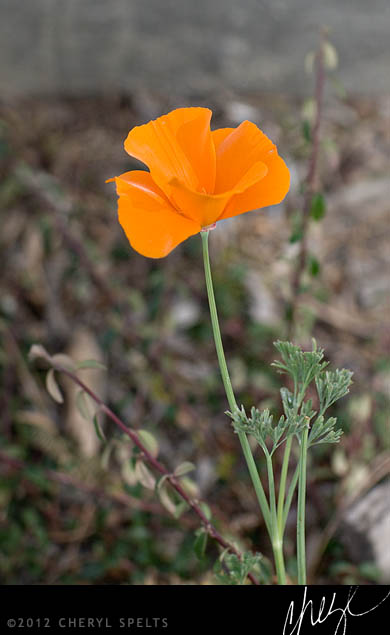 I can never resist pretty flowers… Especially when we’re talking vibrant pink blossoms and bright orange California poppies! Definitely some of my favorites! 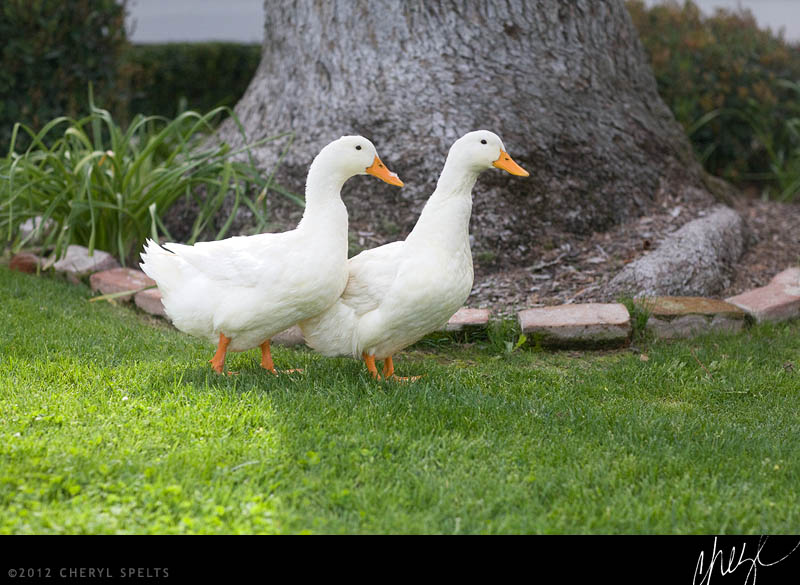 And finally a couple of ducks that showed up on the grounds that morning – someone evidently dropped them off, hoping they’d be cared for at the Mansion. I just can’t imagine how anyone could think that was an okay thing to do? To drop off your pets at a park, and hope someone else decided to feed and care for them? And these ducks were completely tame, and okay with people – and they were so sweet with each other – they were definitely a pair, or at the least very good friends. And they sure were cute!

Carson Mansion and the Pink Lady