It was too hot to go all the way to the top of Mount Rubidoux yesterday. I got a little more than halfway up, and then stopped caring about actually reaching the top. It was over 90° by midmorning, and there were lots of things I could think of to do, way more compelling than a walk in the sun, uphill!

So I got up earlier today, and it was cooler, and I went the rest of the way up – and I was rewarded with a beautiful bright blue sky, and some pretty clouds – it was well worth it! 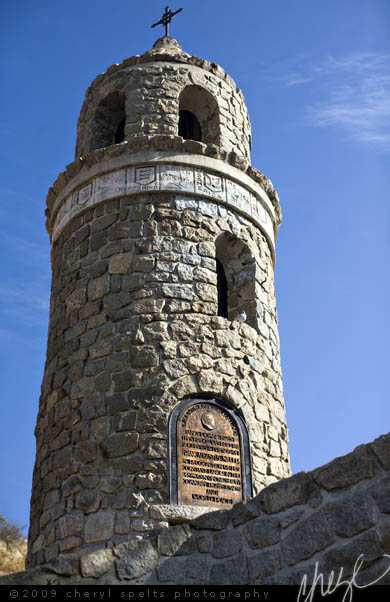 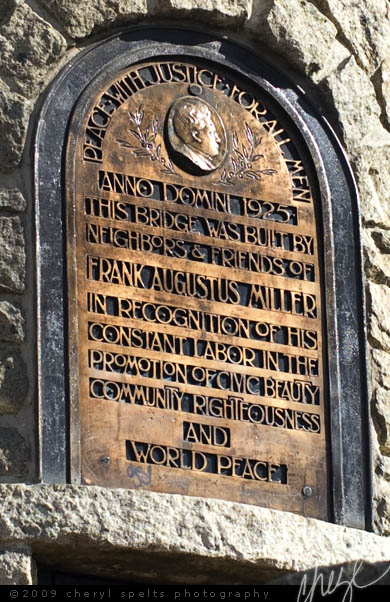 I love the plaque on the tower/bridge – even if there was no date on it, you would know it was circa 1925, just by the art deco stylized lettering. It’s an absolutely perfect example of high art deco, and reads, “Peace with Justice for All Men. Anno Domini 1925. This bridge was built by neighbors and friends of Frank Agustus Miller, in recognition of this constant labor in the promotion of civic beauty, community righteousness, and world peace.”

Frank Miller was the second owner of Mount Rubidoux, along with Henry Huntington. The first owner, in the mid-1800s was Louis Robidoux – note Robidoux, not Rubidoux, as it’s spelled today. Miller, of the Mission Inn, and Huntington, a railroad magnate, bought the hill in the early 1900’s, in order to develop the land around it – as a housing development. There’s a spot dedicated to Huntington as well, but it’s not as interesting as Miller’s dedication. 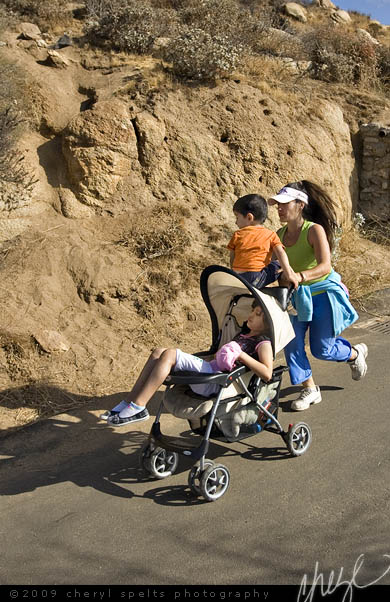 I was fascinated by the number of people pushing strollers up and down the hill, with one or two children in them, while running. It’s a three mile loop, if you do the whole thing, and at least half of that is uphill, so pushing a stroller would really make it a workout – and lots of people do it. The other popular thing to do is to bring a dog or two, on a leash, while carrying a couple of the blue plastic “doggie” bags that are provided at the start of the trail. 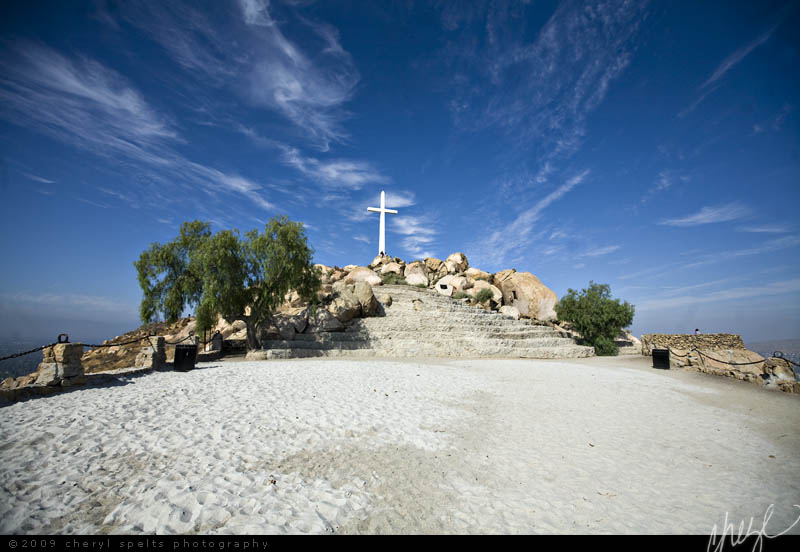 The cross at the very tip-top of the mountain. The first cross was erected on the spot soon after Miller and Huntington bought the property, and one has stood there ever since. It’s dedicated to Father Junipero Serra, one of the founders of several of the California missions.

The first Easter sunrise service was held here in 1909 – and they still happen today – and in fact, the Mount Rubidoux Easter Service is generally considered the longest-running outdoor Easter service in the United States. I blogged about it in May of 2008.

The tiny dark dot at the base of the cross is actually a guy sitting with his back to the cross. Up on top of the world, it’s a good place to think. 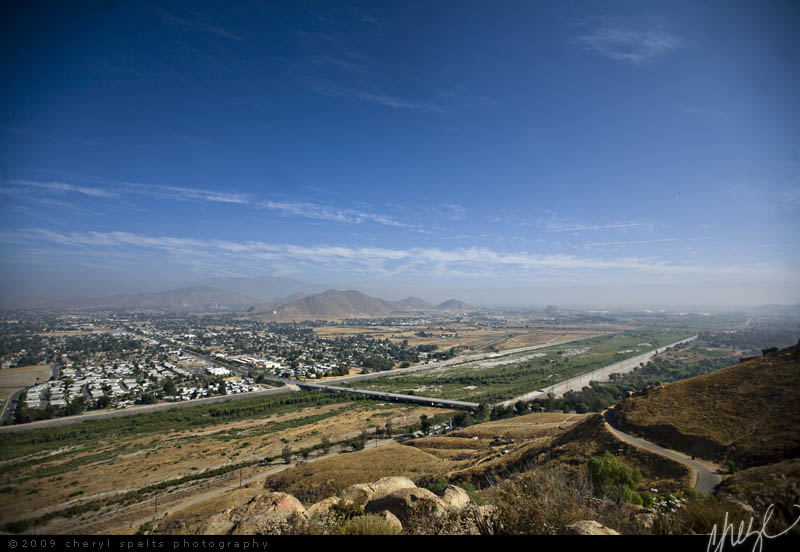 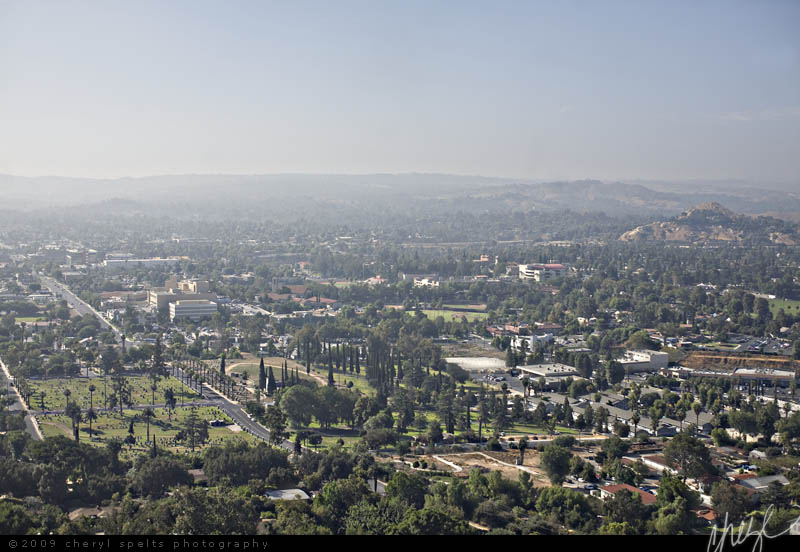 And the view to the east – Downtown Riverside, including the historical cemetery on the bottom left. 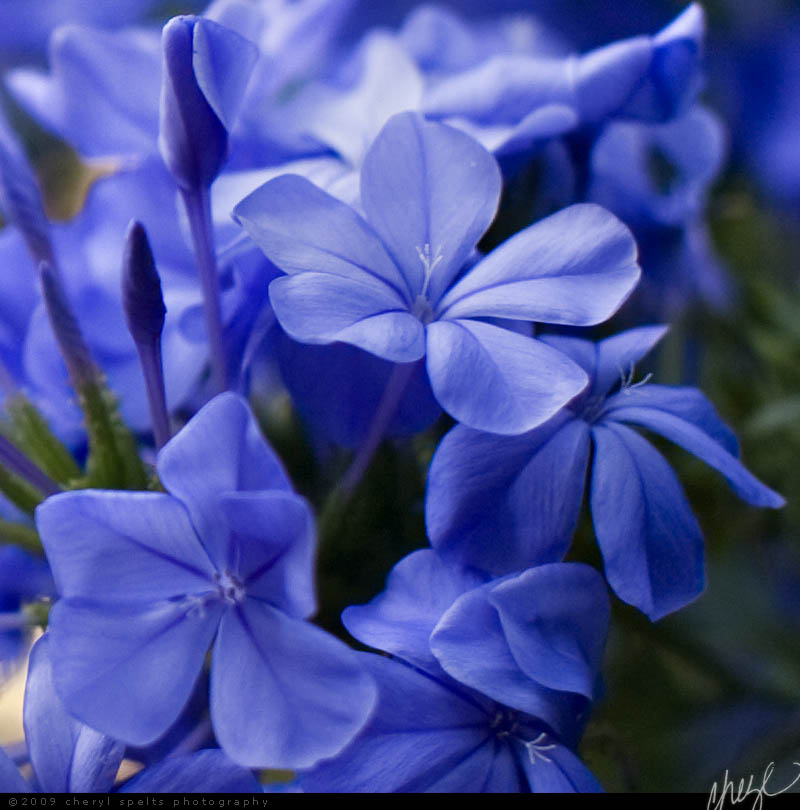 And finally I’ll end with something floral – I just can’t resist the lure of blue flowers, first thing in the morning!

Mad to live, mad to talk