I’m planning to shoot some images of the exterior of my studio once I get my new signs, but I thought I could at least show Elder House today! You can see the stairs leading up to my front door, and the large deck, and the wonderful skylights that flood my main room with soft beautiful light. And in the image below you can see my little balcony, and the edge of the deck.

Elder House has an interesting history. According to an article that appeared in the Village News in 1998, it was built as the result of a competition between three local men in 1883. They each were to build a house for under $3000, and the one who built the best house would win. One of these three houses, described as a “beautiful, ornate home,” was built on Juniper Street, and later moved to West Elder. It didn’t win the contest, but it is the only one of the three still standing. 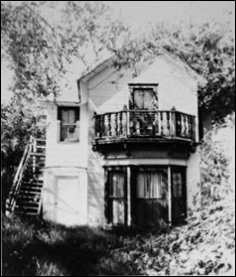 I’m not sure when this photo was taken, but it’s a fairly early shot – probably from before the house was moved to Elder Street. The staircase on the side of the building is long gone, and the house has been extended on both sides, at some point during the last 100 years. But the bay window downstairs and the tiny balcony upstairs look almost exactly the same today as they did when the home was new. 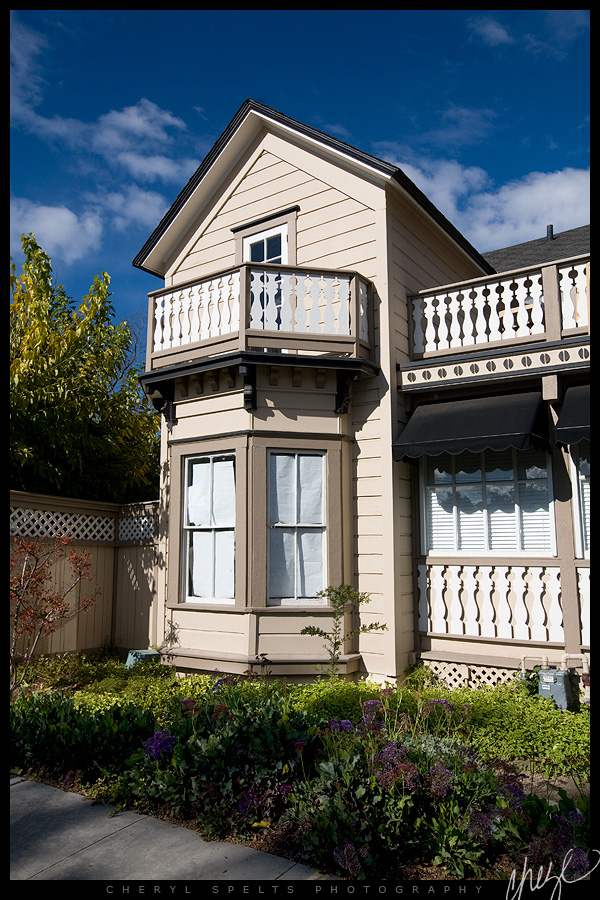 If you’d like to read more about The Building Contest in 1883, go to:
http://www.fallbrook.org/history/history_the_building_contest 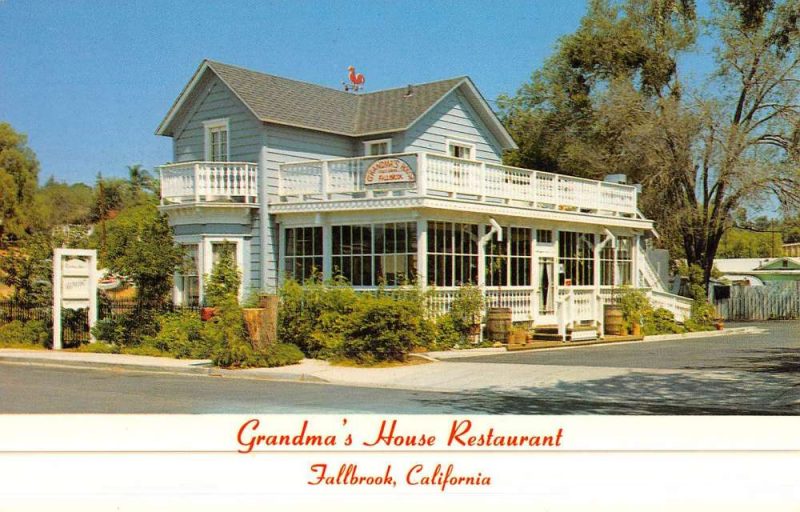 Even though I no longer have my studio in Elder House, I’m still interested in it! And I found this old postcard featuring Elder House, circa 1970! Evidently it housed Grandma’s House Restaurant at the time – and it looked a little different 40 years ago. The spindles on the railing on the second story deck and balcony are much narrower – and more authentic for the time period. The wider style in place today is charming, but I like the 1970’s version! And it’s hard to tell for sure, but the window on the top story, on the far right, may be the original narrow Victoria-era window. At some point it was replaced by a wider window – which lets in more light – but isn’t quite as authentic to the period of the house. And the staircase on the far right, is clearly different – it seems to be oriented east/west, instead of the current south/north.

But perhaps the biggest change is that there was no porch area in 1970. There’s a tiny little landing, leading to the front door, with a tiny railing – a very simple entrance for such a big house. Today there’s a covered porch that’s still small by most standards, but definitely a lot grander than what was there in 1970!

Other than that? Not much different! Even the color isn’t too different. It looks blue in the photo – and it was gray when I first came to Fallbrook – and now it’s a nice warm tan – but still all in the same vein – a nice medium tone, set off by the bright white railing and black trim. It’s a good look!