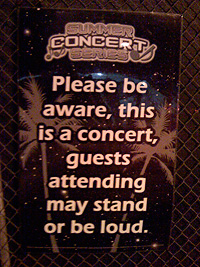 As soon as I committed to going to Canada to see INXS in early July, they announced a handful of dates in California in late August. The very last show, for that leg of the tour was in Sault Saint Marie in July, and I was there. And the very first show, after a five week break, was August 24th at Harrah’s Casino in Valley Center, and I was there too.

The two shows were very different. Sault Saint Marie was a lot of fun – it was my favorite of the Canada shows – but it wasn’t that memorable. Valley Center on the other hand, was very memorable! I think time off is good for anyone, and it seemed to be be very good for INXS. Where the Sault Saint Marie show was a tiny bit slick and predictable, the Valley Center show seemed fresh. And JD was his saucy best that night. It was a serious turn on!

One of my East Coast friends came out for the concert and to spend a few days in San Diego, and we met up with some other friends at the venue. After the concert we wanted a drink, and as we headed to the bar we ran straight into Kirk and JD on their way to the elevator. Kirk made a quick exit, but JD was willing to be delayed, so I shot a few images with my iPhone as he interacted with one of my friends, but the casino was so dark, it was hard to get anything good. Other people started to notice him at this point, and a crowd was starting to form, so I wanted out – somehow being in a big crowd pushing toward a rock star is not my idea of fun! But before I went, I wanted to thank him, and he was listening intently to a guy drone on about the show. So I reached out and touched his stomach to get his attention and said “You were great tonight” and I intended then to move on, but he turned to me with this blindingly beautiful smile and said “Thank you” and then he pushed against my hand with his stomach muscles, making his abs ripple beneath my fingers. I just laughed, and said thanks, and slipped away. It was just such an aggressively flirtatious move, and it was fun! Somehow, every time I interact with JD I leave feeling really good. It’s a true rock star that can make that happen!

We then made our way to the restaurant, and soon after we saw Jon wander by alone. And when a fan stopped him, he was more than willing to stop and talk. More people approached and he ended up staying about twenty minutes, talking to people in the restaurant, until the band’s tour manager came and got him. I didn’t talk to him, I was happy at our table, but it was fun to see him be so relaxed and willing to just chat.