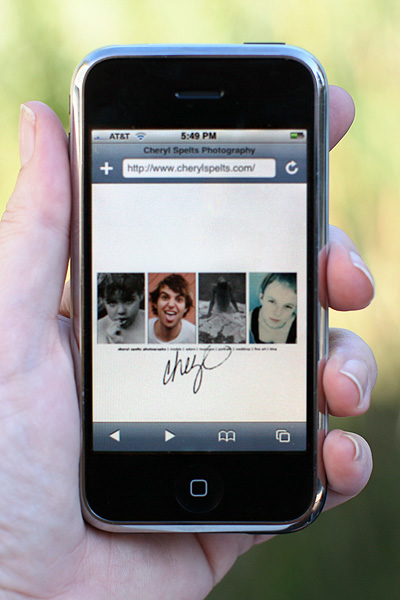 …and I’m the happy new owner of an iPhone!

I tried so hard to resist – really, I did! I’ve never been an early adapter. I’ve always bought into the old, “it’s better to wait and get the second generation of any new product so the manufacturer would have time to work the bugs out.” Yeah, right. Sounds smart…

But I trust Apple and the iPhone is the phone I’ve been waiting for – it’s got all the features I’ve wanted. I’ve heard other people say they’ll wait until it comes out with more memory, or it’s G3 enabled, or whatever – but for me, it’s exactly what I wanted, as is.

That’s not to say it wasn’t a purchase driven by pure lust. Sometimes you’ve just got to give in, and let lust win…

I went to MOPA today with a couple of photographer friends to see the Arthur Lavine/Harry Callahan exhibit. It made me realize how much I miss being in school – not because I miss going to classes, but because I miss being around other photographers and talking about art. It’s so great to be looking at something totally beautiful, and to be able to discuss it with other people who get it! And who may see it from a different perspective and make me see things I didn’t at first.

The Callahan exhibit is huge – a big cross section of his work is shown and you get to see his proof sheets and negatives. You get a real feel for him and his images by the time you’ve wound around and seen everything.

And the stuff by Lavine is brilliant! He’s the guy who shot that really iconic image of brotherhood among workers – hands pulling on a lever – you’d recognize the image if you saw it. Really really beautiful stuff.

They also had a small selection of Ansel Adams images on display.

Then after the museum we headed over to the Prado for margaritas and more conversation. I’ve had lunch at the Prado before, but never been there for Happy Hour, and it’s great! Fabulous passion fruit margaritas in a beautiful setting after seeing some great art. Highlight of the week, for sure!

Yesterday on a whim I drove over the Elder House and rounded the corner just as a group of people were heading up the staircase to my new studio – so I called out and Julie called back that they were on their way up to uncover the bathtub. Totally perfect timing – it was meant to be.

First, you have to understand how much I LOVE clawfoot tubs. There’s nothing else like a big iron tub. They hold the heat, they hold a lot of water, the water is deep – they’re just heaven! And, on top of all that, they’re usually the most beautiful thing in a house. The only thing more beautiful is a great staircase with a carved wood banister – and even that is debatable.

So I was already excited, but it was particularly exciting because I’ve always heard there was a clawfoot tub up there, but who knew if it was true? And now I was going to get to witness the uncovering. And just as important to me, it was thinking about that rumored tub that made me realize I could actually live there – so in my mind the lure of that tub is what led me to my new studio. So yeah, I was excited!

And it’s beautiful! It needs to be resurfaced – I’ve done some research and it’s about $500 to get the work done – but well worth it! 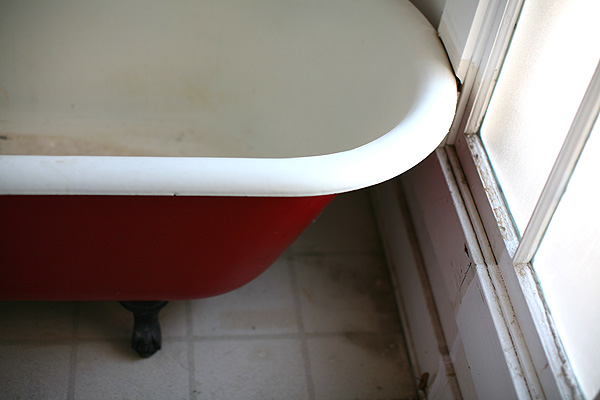 And it’s red. That totally cracked me up! 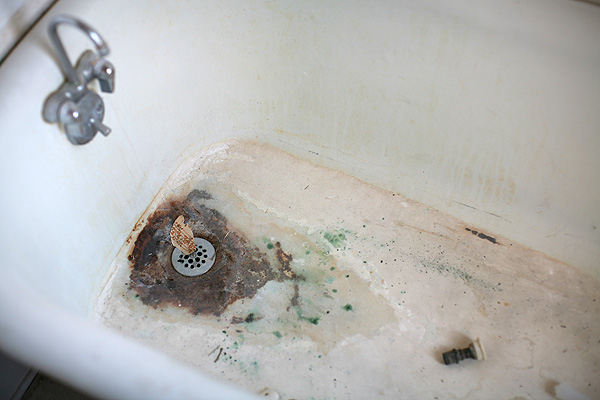 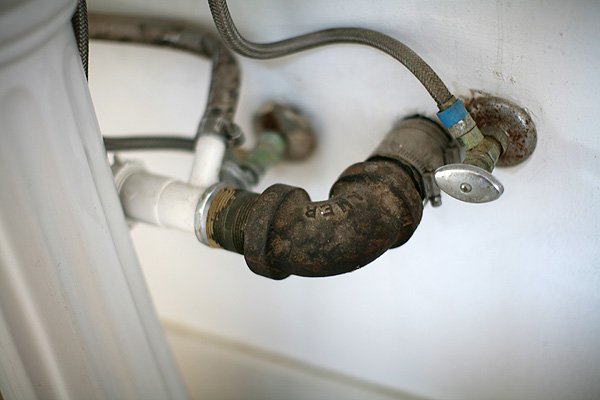 I was under the impression that it had been covered up for twenty years – and it certainly looks that way! The reality is it was only covered a few years ago. But with a little professional help and a few days to cure, it’ll be a beautiful tub again.

I’ve rented a studio! I don’t get the keys until the first of July, but it’s definitely worth the wait. And you’ll never guess where it is…

I was totally prepared to move to Riverside and had been looking at old houses – and seeing some really cool places. I even fell in love with a beautiful house on Pine Street with walls that were two feet thick. It had hardwood floors and a balcony on the second story that was beyond gorgeous. I’d have done just anything for that house – but it was gone by the time I got the realtor on the phone. Houses that special go fast…

The problem with seeing a place that fabulous, is that if you don’t get it, then everything you see after seems not quite as good. Even really cool places just seem lacking in some way.

I wasn’t excited about anything else I was seeing in Riverside, so I decided to take one last drive around Fallbrook, just to see if maybe there was something that I’d overlooked. Some wonderful spot perfect for a studio with great light, that was located downtown… I was NOT expecting to find anything – I’ve lived here forever and I know every corner of the downtown area – but why not take one last loop?

And then I fell in love again!

I’ve always loved Elder House – it’s one of three big old Victorians in the downtown area. One of three houses I affectionately refer to as My Victorian on Vine – it’s the house I leased in 1997 – the home of Fallbrook’s first doctor, Dr Pruitt, built in 1895. I’ve always had a not-so-secret hope that someday I’ll live there again. It sits on top of a hill on a double lot, and has the most beautiful staircase of any house in Fallbrook. The second Victorian is a Stickley on Brandon – I’ve never seen the inside, but I’ve heard that it’s been in same family for many many years. Very cool! And the third is Elder House, an old farmhouse-style Victorian right in the middle of downtown.

Elder House hasn’t been an actual residence in a long time. It was a restaurant in the 1980’s and it housed a construction company when I first came to town. For most of the last decade it’s been an elementary school. Two years ago the owner of the local newspaper bought the house and will be moving her staff there soon. But it’s a big house, and I knew she intended to rent out part of the space to other businesses, so over a year ago I had a conversation with her about renting the old dining room – a great room with a fireplace and three walls of windows overlooking the stream that runs through the backyard. Really too small for what I wanted, but a great room…

So Elder House was in my mind for a long time. Not quite right for me, but very very cool. But as I drove by that night, I remembered that I’d always heard there was a clawfoot bathtub upstairs – hidden under a wood cabinet – and the plan just came together. I’d been looking for a great old house in the surrounding area that I could have clients come to – or a great space downtown and I’d live elsewhere – but a live/work studio downtown is the most ideal situation – and I assumed unattainable in Fallbrook. Thankfully I was wrong!

So today I handed over a check and signed a lease. I am so excited! And I can’t wait to see that bathtub!